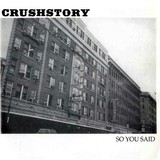 by
Crushstory / Out of Hand

Recorded in Feb. 1995 by Mike Major at Rosewood Studios live to 2-track.
Produced by Crushstory and Out of Hand

JME thankx his parents for everything, Bradly "right arm" Smith, John for introducing me to music, Pepsi, Taco Bell, Sy, Mom and Meredith, Clara and Geezer, Eyad, Stebo, Jon, Krammer, James, Niki, Carson and Mark, Grayman and Neil, Dealers and Lubbock skaters, all the girls I know and hate.

Andy thankx Tico, Ruthy and Daniel, any one who has let me borrow a guitar, Wed, Gilbert and my other cousins, Marsha, Jason R., and Marcello.

CRUSHSTORY thankx a whole lot Jim Western and the Drive In's, Ben and Tu Edge, Out of Hand (for letting us share), G. Ratte', Trenadad and Ken of University Records, Einsteins, and all the Lubbock bands!

Prior to Crushstory, Jamie was in Low Tolerance, and he later played in the Fabulous Baker Boys and 10k Drive. Brooks was later in Sand Which Is, worked with FYHY, and is now in Avec. Andy continues to perform as well.